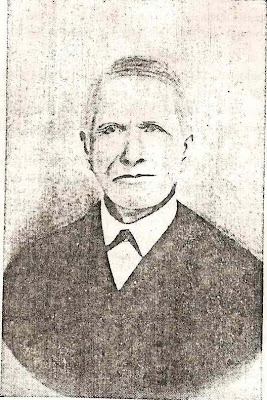 Obituary/Biography:
The following obituary of William Register, 1814-1893, was published in the "Valdosta Times," newspaper, on October, 7, 1893 and was reprinted in the "Register Family Magazine."


Obituary of William Register, "Valdosta Times," October 7, 1893.
"Mr. William Register passed away Sept. 4, at the age of 79 years, having been born in Bulloch County, Ga., Sept. 29, 1814. When a boy, he removed with his parents to Cat Creek, Lowndes County, where he resided for a number of years, and then moved near where Stockton is now; his father once owned the entire landed interest where that town is now situated. While his father resided there, the subject of this sketch united in marriage with Miss Luraney Harnage of Lowndes County, who still survives, Rev. William A. Knight, officiating. After his marriage, William and his young wife located one mile west of where DuPont is now located. While living there he enlisted in the Seminole War as a private under the command of Zachery Taylor, where he remained on and off duty until the close. During the time, he displayed wonderful courage equal to the bravest; not only in the engagements, but as a scout, was most remarkably alert. Many were the successes attained by Taylor's command. Mr. Register with others, opened and cut the first public road penetrating the wilds of South Florida where not only the savage man but the more savage beasts were ever hiding to surprise the unsuspecting pioneer. He too was one of the brave little band of twenty-five who so bravely put to flight the hostile tribe of Indians from what is now known as Indian Hammock on the Suwannoochee Creek. Many noble acts of heroism, privation, and peril characterized this little band of braves."
"After the close of the war with the Seminoles, Mr. Register moved twelve miles south of where DuPont now is, where he lived until his death on the 4th of Sept. 1893, covering a period of 48 years. In 1849, he received a sunstroke which rendered him a comparative invalid the remainder of his life. He raised an interesting family of nine sons and two daughters, all of whom survive him; also his descendants are numerous, leaving 71 grandchildren and 18 great-grandchildren, most of them now living in this section. Five of his sons enlisted ( also as did their father for a short while) in the late war and remained until its close, and remarkable as it seems, only two were wounded and none killed or died."
"Mr. Register was a farmer and stockraiser by profession. In both he was eminently successful, and before his death had accumulated quite a fortune. For twenty years or more he was a faithful member of the Primitive Baptist Church and his remains now rest beside his father and a sister, from their toils, under the shades in Wayfare Church cemetery in Echols County. Honesty, integrity, and truth nobly followed him everywhere and in all his dealings; and he bequeaths not only to his children his earthly inheritance but a life pure as pure can be and as spotless as the glittering gems of paradise. His sons are industrious, useful, and noble examples of integrity, one of them, Samuel W. Register, now being the efficient clerk of the Superior Court of Clinch County."
"In closing this sketch, it seems proper to say that in the death of Mr. Register this county (Clinch) and southeast Georgia loses one of its best citizens __ that class or school of citizens or men who make any country. He has nobly done his part in the advancement of the material prosperity and development of this part of Georgia. His career antedates that of railroads in this section; they were hardly dreamed of. Commerce and trade was carried on by wagons and carts with Darien, old Center Village and a few other minor places. Justice was bi-annually dispensed at old Magnolia, now an old field of pine saplings. Men were honest and their words were gilt-edge security, shin-plasters plentiful __ then indeed, it is sad to see the virtuous of these good old times pass away to the "silent land of sleepers" when we see so few of them left to relate the history of such times."
"A a son, Mr. Register was dutiful; as a father, he was affectionate; as a husband, loving; as a citizen, brother and neighbor, obliging and true. Let us ever cherish his memory and endeavor to emulate his noble examples."
Homerville, Ga., Sept. 24, 1893 _A FRIEND.
Posted by Woody Coleman at 12:37 PM