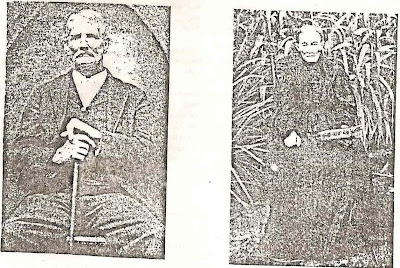 OCCUPATION: Justice of the Peace, Mayor & member of Board of Education.


BIOGRAPHY:
Samuel W. Register was a life-long resident of Clinch county, Georgia and lived in the Withers(1365th) district of Clinch county until 1893 when heremoved to Homerville where he lived until his death. When the Civil War came on, he volunteered May 1, 1862. in Company "G," 50th Georgia Regiment, which was a company made up of Clinch county men and was mustered in at Homerville May 1st, 1862. He served throughout the war, and lost three fingers on his left hand in the Battle of Manasses, Virginia, August 30, 1862. He was paroled in Virginia in April 1865, and returned to his home in Clinch county. In the next county election in January, 1866, he was elected tax collector of Clinch county, and served 1866-1868. When the first Board of Education of Clinch county was set up in 1872, he was appointed by the grand jury as a member, and served four years. He was elected Justice of the Peace in the newly-formed 1365th (Withers) district in 1885, and served in that office until 1890 when he resigned. He was defeated in January,1891, for clerk of superior court; he was the Democratic nominee, but was defeated by the incumbent, W.A. Ecord, who was the Populist nominee. But two years later, he was the Democratic nominee and defeated his Populist opponent by a vote of 326 to 162. He assumed office about two weeks later, and by continuous re-elections held the office until his death the 17th of May, 1908, having held the office longer than any other incumbent in the county's history. Mr. Register was a member of the Masonic fraternity for over fifty years at his death, and had a distinguished service in the order. He first received his Masonic degrees in Stockton Lodge, No. 266, at Stockton, in 1867, and in that lodge served in the offices of junior deacon 1869, 1870, 1871, and senior warden 1872, 1873. Then after that lodge was dissolved about 1876, he affiliated with Cassia Lodge No. 224 at Homerville, Sept. 27, 1879, and there served as senior deacon in 1885, and as worshipful master four years, viz.,1887, 1888, 1889, 1891.
About that time a movement was launched to organize a lodge at DuPont, which was much nearer to his home, and he entered in as a charter member Oct 27, 1892. The next year he became worshipful master and served 1893, 1894, 1895, 1897, 1898, 1899, 1900. Due to advancing age he thereafter declined any further office but was a frequent attendant in the meetings until his death. The Masonic funeral service was conducted at the grave when he was buried, a large concourse of Masons from both the Homerville and DuPont lodges attending. He was not a member of any church. Mr. Register served as mayor of his town, Homerville, in 1906 and 1907.