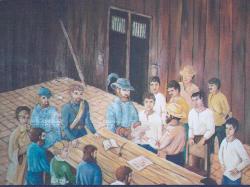 Arrival of Confederate Refugees in Spanish Honduras;This photo by E. Coleman, Jr., 1996, was taken of a section of a mural that commemorates the event. The mural is located in The Museum of History and Anthropology in San Pedro Sula, Honduras.
The Confederados Of Spanish Honduras
"My father and a group of friends went to Honduras after the Civil War, in which he fought all four years in the First Georgia Cavalry. I have his sword. After Sherman's march through Georgia, when he burned and destroyed everything in our part of the state (around Kennesaw Mt. And Marietta), things were very bad, and this group of young soldiers and their families decided to go to Honduras. Others went to Brazil." Laura Kolb (Coleman) Kingsbery, (1884-1971)
Following its defeat in the War Between The States, the South was in economic ruin. Poverty, lawlessness and fears of an occupying Union Army caused great anxiety among the Southern people. There were those who were angry and bitter of the South's loss and others were on a quest for adventure. For many reasons, Confederate exiles from across the Southern United States began an exodus to various countries of Latin America. Among those countries that offered refuge, freedom, and economic opportunity were Brazil, British Honduras (Belize), Mexico, Spanish Honduras (The Republic of Honduras), and Venezuela. The subject of this essay concerns those Confederate emigrants and refuges of the Republic Of Honduras known also as Spanish Honduras.
Having previously planted a Confederate colony in Mexico, Major Green Malcolm of McNairy’s 1st Tennessee Cavalry now planed to set up a system of plantations, modeled after those in the Mississippi River Delta, along the rivers of the interior of Spanish Honduras. Organizing and setting out from Atlanta, Georgia in the Spring of 1867; his colony of thirty Confederate families, seventy in all, made their way to New Orleans where they booked passage to Spanish Honduras.
Despite their difficulties, upon arrival at Fortress Omoa, near Puerto Cortes, Major Malcolm led his colony of Southern refugees into the interior of Honduras where at Comayagua, Honduras he met with representatives of the Republic and presented a letter for President Medina of the Republic of Honduras explaining their reasons for emigration and an offer of services in exchange for citizenship, certain considerations and concessions.
"GENTLEMEN: The undersigned respectfully submits to your consideration that on the 10th of April, after a passage of ten days, I arrived in the city of Omoa with seventy souls, emigrants to your beautiful land. These persons consist of men, women and children who are what might be termed the forerunners of perhaps thousands of the best citizens of the Southern States, of the United States. We wish to make this our home.
To find in this that which we have lost in our own native land, liberty.
To make this what our country was before it was destroyed by our enemies.
Our desire is to become citizens of the Republic at once, to be a part of your people, to claim your protection, to defend you with our lives from foreign invasion, and to do our whole duty to our adopted country.
In coming among you we would state that on account of our recent great misfortunes, many of us are greatly impoverished, and without going into further preliminary remarks, would give this as our reason for asking you to grant the following privileges and donations. ...With the highest consideration, I am gentlemen, your obedient servant.
(Signed)
G. MALCOLM.Comayagua, Honduras, C.A., May 3, 1867."
The concessions listed below were requested by the Confederate colony and were included in Major Malcolm’s letter to the government of Honduras on May 3rd, 1867.

1st. A grant of land as indicated in the accompanying map.
2nd. A free port at Port Acabellos for three years, for the exclusive benefit of the colony.
3rd. The exclusive navigation of the rivers Chamilicon, Ulua, and their tributaries for ten years.
4th. The right to build roads through public or private lands for the benefit of the Colony and Government.
5th. The right to construct aqueducts and bring water through our and adjacent lands.
6th. The exemption from taxation for two years from the day of arrival.
7th. The privilege of enacting our own municipal regulations in conformity with the laws of the Republic.
8th. The privilege of organizing our city adjacent to San Pedro, separately from that town and naming it the city of Medina.
9th. The exclusive privilege of establishing manufactories for the manufacture of woolen and cotton goods in the Republic for ten years.
10th. The exclusive privilege of introducing for five years, wagons, buggies and carriages, the common sense sewing machine, washing machines of all descriptions with machines for making tin-ware.
11th. The privilege of distilling liquors from the productions of our farms. The privilege of planting and harvesting all seeds in our colony, and introducing the still known as the Log Still.
12th. The privilege of introducing for eight years the circular saw mill run by steam or water, planing machines and shingle machines.The above we acknowledge appears liberal and we would not have you think us asking too much, for we by these privileges and grants, desire and are determined as far as possible to use them to the improvement, development and welfare of thecountry as well as ourselves. ....G. Malcolm.
In reply to Major Malcolm’s letter on behalf of the Confederate colony, permission to settle in Honduras and the following privileges and concessions were granted by President Medina and his Honduran government.

Allen, Andrews, Barnes, Bahr, Beall, Becker, Briers, Caron, Coleman, Collier, Cunningham, Doubleday, Duffie, Ferguson, Follin, Frierson, Goldsmith, Grow, Haralson, Henderson, Hill, Higginbotham, HunterJohnes, Lubbe, Malcolm, McClellan, McCollum, Mitchell, Murphy, Pennington, Noren, Perez, Pierce, Pirkle, Porter, Schmidt, Skinner, Swett, Sylvester, Tanner, Thomas, Thompson, Tindle, Troy, Wade, Waller,Walters, Warren, Weinreich.
They established their colony adjacent to the town of San Pedro, (San Pedro Sula), and named it the city of Medina in honor of the President of the Republic. They were granted land upon which to build their farms, and given other considerations. They were granted permission to elect their own municipal council and establish regulations in conformity with the laws of the Republic for
their colony. Economic failure, disease, and other hardships took their toll andby 1870 many of these families left Honduras going their separate ways. Enough, however, stayed, became successful, and played an important role in the industrialization and modernization of the Republic. Eventually the city of Medina was absorbed by San Pedro Sula.