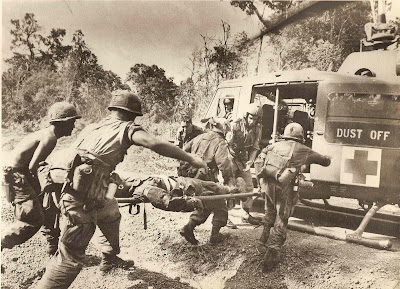 Paratroopers of the 173rd Airborne Brigade, Vietnam, 1965-1966
In Memory of Those That Didn't Come Back
"FREEDOM IS NEVER MORE THAN ONE GENERATION AWAY FROM EXTINCTION.WE DIDN'T PASS IT TO OUR CHILDREN IN THE BLOODSTREAM.IT MUST BE FOUGHT FOR, PROTECTED AND HANDED ON FOR THEM TO DO THE SAME,OR ONE DAY WE WILL SPEND OUR SUNSET YEARS TELLING OUR CHILDREN AND OUR CHILDREN'S CHILDREN WHAT IT WAS ONCE LIKE IN THE UNITED STATES WHERE MEN WERE FREE."

As we approach MEMORIAL DAY, this Monday, May 25th, 2009, we again are called to remember those who have made the ultimate sacrifice for our country.

Its been many years since I retired from the United States Army but
several verses from the Code of Conduct and the Army Oath of Enlistment ,which I stll hold sacred, still reverberate in my conciousness:

"I am an American fighting man, I serve in the forces which guard my
country and protect our way of life ...I will never forget that I am an
American fighting man, responsible for my actions, and dedicated to the principles which made my country free... I will trust in God and the United States of America" (from the "Code of Conduct)

"I do solemnly swear that I will support and defend the Constitution of
the United States against all enemies, foreign and domestic...that I
will bear true faith an allegiance to the same...So help me God." (Oath of Enlistment)


All US Armed Forces men and women are familiar with the content of these two affirmations, the principles of which, are embodied in our American "Declaration of Independence," and "US Constitution."


The principles defined and implied in these documents are what our armed forces men and women, past and present, fought and died for in order to bequeath to us and our posterity, the blessings of liberty.

Let us remember them and their sacrifice as we remain true to the fundamental principles and ideals upon which our country was founded, and teach our children reverence for the same!