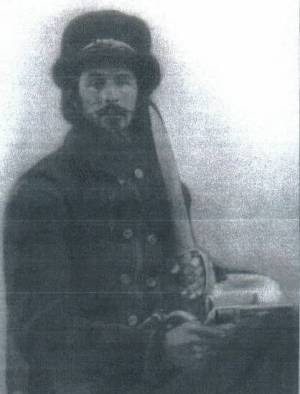 Major Abednego Greene Malcolm, 1st Battalion, (McNairy's), Tennessee Cavalry:
Abednego Greene Malcolm, known also as Greene Malcolm and in some records as Greenbury Malcolm, was born September 18, 1821 near Frankfurt, Kentucky. Orphaned at nine years of age, he was the son of a Veteran of the War of 1812 and grandson of Revolutionary War Veteran, Nathanial Greene, of Revolutionary War fame. By profession, Greene Malcolm was a Physician, having graduated from the School of Medicine at Edinburg, Scotland. He traveled extensively over Europe, parts of Asia and the Fiji Islands and once declined an offer from Commodore Perry to accompany him to Japan.
On June 9th, 1846 he enlisted for service in the Mexican War at Louisville, Kentucky serving with the 1st Regiment (Marshall’s) Kentucky Cavalry. Stationed initially at Camp Patterson, Texas on October 31st, his unit was ordered to Monterey, Mexico in December 1846. During his Mexican War service he saw action in the Battle of Agua Nacoa and was with General Taylor at the Battle of Buena Vista. He carried a scar from that battle where he received a wound inflicted by a Mexican Cavalryman. He was afterwards with General Scot at the fall of Mexico City and was the second man over the wall at the fall of that fortress city. He was discharged from service following the war on June 1st 1847 at New Orleans. During the war he contracted chronic dysentery which he never got over.
In 1848, he went to California where he amassed a fortune and lost it all by the causes of fire , flooding and Indian raids and spent the next two years on the Texas frontier fighting Indians.
On June 15th, 1861, at the opening of the War Between The States, he enlisted in the 1st Battalion, (McNairy’s), Tennessee Cavalry serving in the rank of Major. His campaign participation included operations in Kentucky and Tennessee and he carried the last train out of Atlanta, Georgia just before its fall into the hands of Federal troops.
Following the War Between The States and the South’s defeat, rather than endure the persecution and humiliation of “Reconstruction,” he traveled to Mexico, where with other like-minded Confederate soldiers, he helped to plant a Confederate colony. Following the plantation of his colony in Mexico, he returned to Atlanta, Georgia where he planed and organized another colony of ex-Confederate soldiers and their families. Setting out in the Spring of 1867, his colony of thirty families made their way to New Orleans where they booked passage for Spanish Honduras (The Republic of Honduras). Despite their difficulties, upon arrival at Fortress Omoa, near Puerto Cortes, Major Malcolm led his colony of Southern refugees into the interior of Honduras where at Comayagua, Honduras he met with representatives of the Republic and presented a letter for President Medina of the Republic of Honduras explaining their reasons for emigration and an offer of services in exchange for citizenship, certain considerations and concessions:
“GENTLEMEN: The undersigned respectfully submits to your consideration that on the 10th of April, after a passage of ten days, I arrived in the city of Omoa with seventy souls, emigrants to your beautiful land. These persons consist of men, women and children who are what might be termed the forerunners of perhaps thousands of the best citizens of the Southern States, of the United States. We wish to make this our home.
To find in this that which we have lost in our own native land, liberty.
To make this what our country was before it was destroyed by our enemies.
Our desire is to become citizens of the Republic at once, to be a part of your people, to claim your protection, to defend you with our lives from foreign invasion, and to do our whole duty to our adopted country.
In coming among you we would state that on account of our recent great misfortunes, many of us are greatly impoverished, and without going into further preliminary remarks, would give this as our reason for asking you to grant the following privileges and donations. ...With the highest consideration, I am gentlemen, your obedient servant.(Signed) G. MALCOLM.Comayagua, Honduras, C.A., May 3, 1867.”

Soon after establishing their colony near San Pedro Sula, and naming it the colony of “Medina”, in honor of the President of the Republic of Honduras, it was decided to place the government of their local interests under the control of a council, in order to avoid the necessity of assembling the entire colony when any question of interest or expediency should arise likely to affect their welfare. At a public meeting, an election was held of the following representatives:

Major Malcolm was later appointed Minister of Immigration by the government of the Republic of Honduras in order to facilitate their transition of new arrivals to the colony.

Posted by Woody Coleman at 1:33 AM