The Coleman-McCollum Family of Alabama 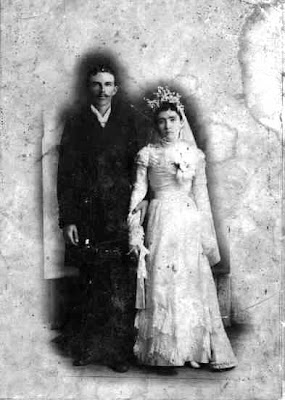 "The family of William A. Coleman & Theresa McCollum"

Just in case any of William Allen Coleman's descendents should some day want to look up their family lineage, I am putting on paper as much as I know about the Coleman family history. I must admit that my knowledge of the family is somewhat limited.
W. A. Coleman was the son of John Henry Coleman. John H. was from the Carrollton, GA area. He was a veteran of the Confederate Army, having served in the 1st Georgia Cavalry regiment. John was a large man, well over 6 feet tall and probably weighed close to 300 pounds.
I did not know him personally, but I remember seeing him sitting on his front porch on Elmwood Avenue (#312). He lived there during the 1920's and early thirties. He died in 1932 and is buried in the cemetery at 1st Baptist Church, Hokes Bluff, AL. As far as I know he was a retired farmer. I believe he was 91 years of age when he died. He and his wife Sally were the parents of William Allen, John Henry II, Mary, Genie, Dora and Kendrick.
John Henry II was a railroad man. Mary married a Doctor Friddell and lived at Boston, GA. Dora married a Mr. Fore and lived in Birmingham, AL. Genie married a Mr. Palmer. She was divorced, I believe, and lived with John and Sally on Elmwood.
W. A. went to Honduras, Central America, about 1897 or 1898. (I say this because his oldest child Laura was born around 1899 - 1900). He married Maria Theresa McCollum, a 13-year-old orphan girl who was living with the family where W. A. was boarding. Her mother had died when she was a small child and then her father was drowned in the Chaloma River (crossing on a horse - the horse made it).
W. A. had a cousin, W. F. Coleman, who had been in Honduras for some time and was quite wealthy. At first, W. A. was engaged in the logging business. Later on he bought land and owned and operated a 1400-acre banana plantation. When he died in 1930, his estate was worth about $300,000 and consisted of land, cattle and equipment. When it was settled (in 1949 or 1950), it was worth about $15,000. W. F. Coleman was the administrator of W. A.'s estate until his death in 1941 or 1942, when the Honduras Court appointed a successor. By the time the estate was finally settled, all of the assets had disappeared except the land.
In 1937 (or thereabout) a hurricane destroyed the banana crop. The next year insects destroyed it. The next year a disease damaged it, and the United Fruit Co. quit buying bananas from that area because of the disease.
W. F. had begun raising cattle in earnest to replace bananas when he died.
We used to get a monthly financial statement from W. F. on which he showed a cash balance of about $20,000. During the years that the banana crop was not producing, the cash balance fluctuated up and down from the $20,000 figure. Then one month, he called attention to the fact that he had been administrator of the estate for so many years, during which time he had paid himself no salary. He stated that he had decided to pay himself $250 per month for all the years he had been administrator. Needless to say that took care of the cash balance.
The Coleman children (W. A. and Maria Theresa's) were Laura, Lucille, James, Margaret, Teresa, John Hugh, Lois Elizabeth, Henry and Pearl. All the children, except Laura, were sent over to the states for their education. James went to St. Louis to study or learn how to be a diesel engine mechanic. Lucille went to New York where she worked for a Honduras diplomatic or trade commission. All the others came to Gadsden, eventually.
In 1930, W. A. brought his wife, and Henry and Pearl, to the states to establish permanent residence. He was on his way to Florida (where he planned to live) and had stopped at Boston, GA to visit his sister Mary. While there, he became ill with pneumonia and died there. His widow and four youngest children stayed in Boston for several years before they came back to Gadsden. They lived in the house on Elmwood where John Henry and Sally Coleman had lived. John Hugh and Lois were graduated from Gadsden High School in 1935.
Lois and I were married on December 8, 1936. We began housekeeping on Chestnut St. in Gadsden. The Gadsden City Hall is located in the block where we had an apartment. Our landlady was Miss Emma Barrett, to whom we paid $20 per month for the furnished apartment with utilities included.
In Honduras, the Coleman's lived at Choloma, San Pedro, Sula. I believe that is near Porto Cortez on the Caribbean side of Central America.
Maria Theresa McCollum was of Irish descent. I understand that the McCollum family was quite wealthy. One of the sons who was studying to be a priest got married instead and was dis-inherited where upon he went with his bride to Honduras. He was the one who drowned.